Irisa Nyira, also known as Irisa Nolan, is a female Irathient, the adoptive-daughter of Joshua Nolan, a deputy Lawkeeper of Defiance and the host of the Kelovan?.

Irisa Nyira is a member of an alien species known as “Irathients”, and is essentially the deputy to lead character Joshua Nolan. She is played by actress Stephanie Leonidas. Smart, independent and feisty, Irisa still struggles with the weight of her unusual upbringing. A drifter since birth, she only stays in Defiance due to the loyalty she feels for Nolan.

Nolan rescued Irisa at a young age and has encouraged her to leave behind her traumatic past. The two have been inseparable ever since, and Nolan has said that Irisa is a war orphan that he found abandoned in what was once Denver. However, it has been hinted at that she and Nolan have something of a dark history that will be explored more deeply as the series develops.

Chaps: These photos are the front and back of the chaps in progress. These were taken before there were any pockets, buckles or buttons sewn on at all. They were made from a brown suede skirt found at our local Goodwill.

Shirt in progress: This is a shirt I found at our local Goodwill. You can see the print is pretty close to the original one in defiance. I modified it by first sewing up the front to make the blouse fit better, and I was able to sew out the buttons in the process. I then pulled it on over my dressform and cut off the collar, modified the front and put a few holes in the sleeves for authenticity.

Leather Hoster: The leather holster was made by draping paper on to my dressform in the shape of the holster. I then took the paper and traced it on to some leather scraps that I had. I then dyed it and added the buckles and lacing. The lacing was actually made from very narrowly cut pieces of suede cloth that I had lying around.

Pants: My pants started out a light denim wash. I soaked them in some brown dye and then pulled them out to rub a bit of watered down bleach to make them look faded. I then sprayed, or rather dusted, them with a matte brown acrylic paint to give them a dirty dusty look.

Knives: My knives started out as narrow wooden slats. I drew the shape on to the wood and then cut them out with a jigsaw. I then sanded them down even further to get rid of rough and splintering edges. I sprayed them initially with silver paint, and then proceeded to experiment with various paints until I was satisfied with the look.

Necklace: My necklace was made with various beads found in my collection. I believe the brown beads might be coconut. They came from a necklace that was broken over ten years ago. I guess this goes to show that some things are worth saving for future use! I also thought it would be fitting to make a necklace out of the beads that I found, because I imagine that is what Irisa probably did as well. I then took a washer from Mike’s tools to complete the look.

Wig: This wig actually came together at the last minute. I had an orange wig on order, but I learned the hard way to never order a wig from China, through Amazon, less that a month before you need it. I had ordered it about two weeks before. Luckily I had a reddish wig on hand. The only problem was that it had bangs. I actually ended up just cutting out the section of the wig that held the bangs. Then I hacked it up some more until I was satisfied with the style. To get the wig to have that matted and messy effect, I added lots of hairspray and gel one small section at a time. Then I took the hairdryer to each section, one at a time. The hair dryer will actually melt your synthetic wig if you get it too close. I wanted my wig to have a matted look, so I brought the dryer in closer and melted some of the strands together. After I achieved the desired effect, I then sprayed the wig. The spray I bought was actually orange and red colored hair sprays from Party City.

Belt: My belt came from our local Goodwill. I added in extra holes with a leather punch.

Leg Warmers: My leg warmers were made by cutting off the sleeves of a sweater found at our local Goodwill.

Debut of Laura’s costume at Dragoncon 2013! 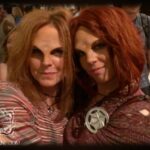 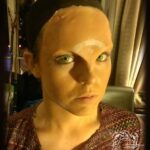 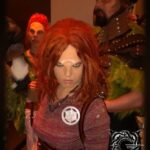 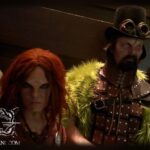 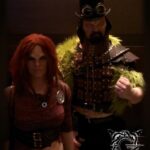 Laura has been working hard! Here are some shots of her costume in its current state.

Laura Bielaczyc is going to have a full Irisa costume by Dragoncon 2013.