Salome is a character from a trading card game, Cardfight !! Vanguard. I never heard about this game, until the day when a friend of mine shared artwork from the game on Facebook. I immediately fell in love with the design of Salome, an elf with a shiny armor, covered of jewels. I knew it was a big challenge, but I also knew I would love to cosplay her.

I have been cosplaying for three years, and I already experimented with a lot of techniques, but on this project I had to work with a lot of new ones. It was my first armor and I decided to make it in Worbla, a thermoplastic material. I started with the simplest pieces, and slowly increased the difficulty to the hardest ones. I wasn’t easy but I really enjoyed that part, for each piece I had to conceive a 3D structure and build it to get something as accurate as possible to the reference picture. Worbla is an amazing material, not easy to use at first, but it gives a lot of possibilities to create something unique. Ultimately, I made 28 pieces armor pieces. Priming and painting took a very long time and I’m happy I managed to get a metallic effect on it. The other big part of this project was the gems on the armor and on the sword. I decided to entirely make them by myself, in resin. The first challenge was to find the molds with the exact shape I was looking for…. You have no idea how hard it can be to find something until the day you’re looking for something very precise! I spent hours and hours on internet to finally find the models that would be accurate to the reference. But I still had a lot of work, I needed a lot of gems and I had to cast resin at least a dozen of times to make enough of each kind. Most of time, everything went well, but for the last ones I had to make (few weeks before the convention at which I was supposed to wear the cosplay!), casting were a disaster due to weather conditions, and all I could made at this moment was sticky and flabby heap of resin. I finally managed to finish on time, but that was very stressful at the end! Sewing part has been easier for me, as I had more experience in this field. I worked on a suit and two cloaks, on which I also had a paint job for details. Hairdressing and make-up is maybe the part that required the less of work on that cosplay. I used a quite simple wig, the only challenge was to manage to keep it on my head, as I had two very heavy hairclip on it. Ears were a bit difficult to find at first. Few years ago I bought small elf ears for an Arwen cosplay at a French supplier, so I decided to find the right ears at this store. Unfortunately, none of them were big enough for this cosplay. It took me few hours of research to finally find the website of Aradani Studios. Large anime elf ears were exactly what I was looking for, and the painted version looks incredibly natural when worn! That project was a huge challenge, I worked on it during almost seven months, but I’m proud of the result I managed to get. Of course everything is not perfect, by the way I’m currently working on improvements on the paint (I want to get a chrome effect on the armor), and on the sword (I’m going to put some light on the blade, to make a shiny sword!). As a conclusion here is a few pictures of the complete cosplay, and for more pictures and more crazy projects like this one, I invite you to have a look on my facebook page, Sylyne Cosplay. Items used in the cosplay: 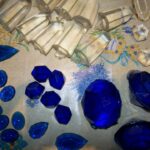 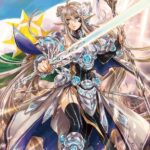 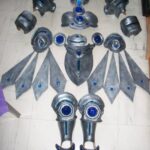 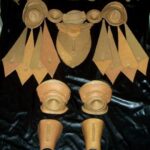 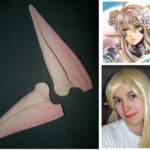 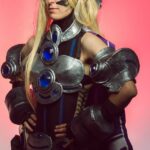 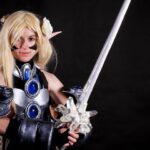 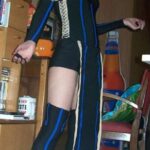 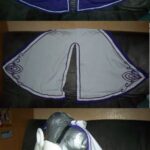