Sometimes it’s the finishing touches that make a cosplay stand out.

It could be a good wig, the right colored contacts, or maybe even a touch of makeup from a bruise wheel. But if you’re cosplaying any kind of fantastical creature—an elf, a hobbit, a dwarf, or a faun, to name a few—there’s no question you’re going to need a pair of ears to take your costume from memorable to downright believable. That’s where Aradani Costumes comes in.

My sisters and I have a DragonCon tradition. Every year, in addition to our other cosplay plans, we try to put a unique spin on three Disney princesses. Last year, our princesses were Jedi. This year, we were looking for something to put our thinking caps even more to the test, something new and unexpected, but hopefully recognizable. In all our internet-scouring for ideas, we hadn’t seen one Disney princess faun—so of course, that’s what we decided we absolutely had to do. What followed was three feverish weeks of sending ideas back and forth across the country to each other—photos of goats, swatches of fur, thoughts on how we might make the hooves with DragonCon just a month away.

Finally, I drew us each a design based on the ideas we had thought up together. For the Ariel faun, we wanted a very aquatic feel, and so landed on seaweed green fur and horns that resembled coral. Elsa from Frozen was designed as a snow faun, with white fur and antlers dripping ice, while Merida’s design was earthier—brown fur with the curled horns of a Highland goat. In case our color schemes and wigs weren’t hint enough, we accessorized our designs to give tribute to the original characters. Ariel wore a vintage fishing net draped with seashells and who’s-its and what’s-its galore, Elsa wore her classic ice corset (made of more than a hundred hand-cut and painted tiles of vinyl), and Merida’a pauldron and body paint simulated the look of her dress in the movie Brave. 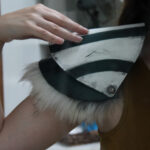 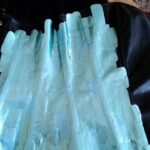 The first design stage complete, we set about crafting a pattern for faun legs.

Early on in the planning process, we decided to forgo any stilt or high heel builds in lieu of being as comfortable as possible at the crowded con. What we came up with instead was an eight-piece pattern that made room for six pieces of upholstery foam that simulated the jointed look of the faun leg. The best part? We could wear sneakers! Our hooves were made out of worbla that screwed into the soles of our shoes, which were then covered by fur. We weren’t the tallest fauns around, but I’d venture to say we had the comfiest feet. 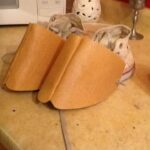 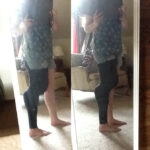 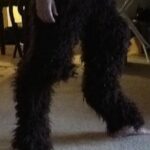 While we all approached our horns differently—Ariel’s coral horns were sculpted out of polymer clay, Elsa’s anters were carved from expanding foam, and Merida’s were made more like an armature, with air-dry clay built over newspaper and wire—we mounted them the same. Using headbands painted to match the colors of our wigs, we dremeled attachments for the horns to be screwed into. With a little rearranging of the hair, the horns looked basically seamless. After a makeup test or two, we were almost ready to go. 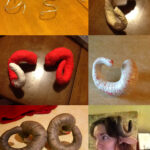 When the sisters first decided to be fauns, we knew right away the one thing that would be a must was a good pair of ears that would 1) look real 2) withstand the abusive heat of Atlanta at the height of summer 3) be easy to take on and off, since the rest of our costumes unfortunately wouldn’t be. We figured we’d be lucky to get two out of the three. But I’d ordered elf ears from Aradani before and been impressed. So, crossing our fingers, we gave them a shot.

Three out of three, our hopes for these ears were met and surpassed.

First, the realism factor. While I ordered my ears pre-painted, my two sisters ordered theirs without any paint. One of them chose to paint hers to match her complexion. The other left her ears as they came, a fleshy beige tone. So we had the unique experience of trying out these ears in every form – painted by Aradani, painted by us, and not painted at all. They looked great in every stage, though I’m partial to Aradani’s paint job; their subtle shading makes the ears look even more real.

Because these ears encompass almost the entire actual ear from temple to hairline, the seam is much less obvious than with other ears I’ve seen. Parting a few wisps of hair on either side of the ear turned out to be enough to hide the seam entirely. However, the ears don’t cover your ear hole – so no worries about muffled hearing (which is never fun, at conventions).

Like my mom said when I tried on the ears for the first time, “They change the entire shape of your face! In a good way!” (Thanks, Mom.) But I think I know what she meant. The shape of ears and their juxtaposition to the cheekbones has an elongating effect on the face that’s very flattering…and yet they definitely bring a beastly edge with them. You’ll want to frolic in the woods with fairies and simultaneously pick up a longbow and some war paint. It’s a great combination.

Moving on to factor number two: the ears’ heat resistance. I will say this of this year’s DragonCon adventures (and misadventures): at one point I cosplayed a dwarf, and after a little while of sweating, the spirit gum tacking my facial hair in place had completely melted off. Even contending with my heavy, unruly Merida curls, these ears didn’t budge. But when we limped, exhausted, back to our room, a little spirit gum remover was enough to take them off without any sign of damage. In fact, they looked pretty much brand new and instantly ready to be worn out again. These things are hardy! I expect them to have a long, happy shelf life and to see many more trips to cons and my local Renaissance Festival.

As for factor number three, ease of use – it almost goes without saying that they were a breeze for us ear-noobs to put on and take off. The material is relatively forgiving if you need to readjust before the Spirit Gum has entirely set. Plus, Aradani has a great article on the perfect way to wear and store them. Just don’t do what we accidentally did, and get the Spirit Gum in your hair—ouch!

I have two highlights from wearing these ears at the con. The first was when we were stopped by the elevators for a picture, and one well-intending con-goer exclaimed, “I don’t know what you are, but your ears are awesome!”

Then, a little girl who did recognize our characters asked me, “How’d you get your ears like that?” Sadly, I had to tell her I’d bought them that way.

Thank you, Aradani, for what you do! I can’t imagine getting my fantastical ears anywhere else.

Now it’s finally time for me to cosplay Link. I need an excuse to buy some more ears